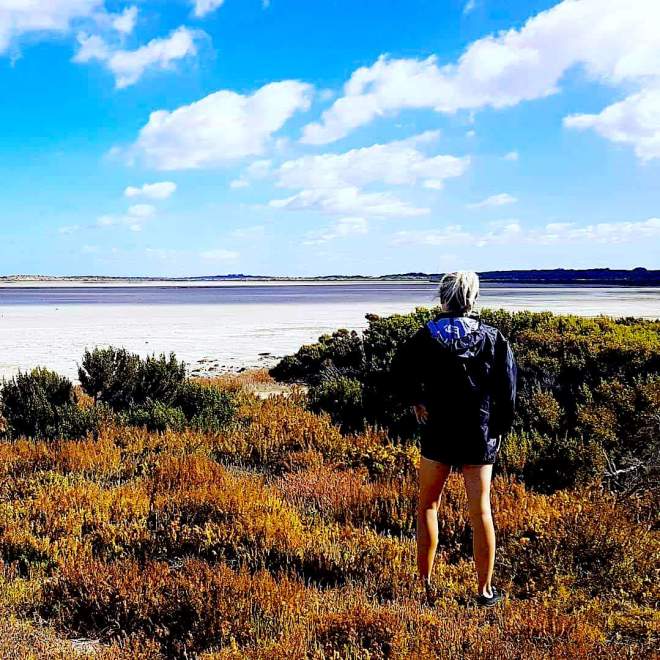 The Coorong, derived from the Aboriginal word ‘karangk’, meaning narrow neck, is a coastal lagoon system in South Australia. Visiting the Coorong always gives me mixed feelings, I have spent many a cold winter day sampling in the freezing waters. I have also been able to experience the true beauty of this environment. Sheltered behind a coastal dune system, the Coorong waters weave down the coastline for 140km. Kangaroos, emus and echidnas frequent this area and without fail I have been lucky enough to see at least one on all of my trips. The Coorong is such a quiet, tranquil place, on many of my trips I often imagined I was traversing a new planet – but that could be because I have watched one too many sci-fi movies.

The water level in The Coorong fluctuates with the rainy season so sometimes it is completely dry and you can walk from the landward side to the dune, other times the water level is so high you need a boat to get across. It is a hyper saline environment which means the water is much more saltier than seawater. I would quite often find salt encrusted on my legs and hands after a day working in The Coorong waters, but it wasn’t always this way. Historically, it was believed to be more of a brackish environment due to the freshwater inflows from the Murray River and the seawater inflow from the Murray Mouth. The Murray Mouth is known as a place of creation for the Ngarridnjeri people, the traditional owners of this land.

Personally, I feel this is an underrated ecosystem, it boasts an abundance of life and beauty and there is a certainly a feeling of connection to the land. It is well worth experiencing but this wouldn’t be one of my blogs if I didn’t delve into the science of this system. Warning! what’s coming up next will be a little disheartening as we have caused some serious problems for The Coorong… You see, we have drastically altered the hydrodynamics of the Murray River which flows into The Coorong. By creating dams and siphoning off water for agriculture, we have reduced the naturally occurring amount of freshwater that would otherwise maintain this system as a brackish environment. Extensive agriculture has also lead to increased sediment and nutrient run-off which has flowed into The Coorong and caused further issues. Some of this imported sediment has prevented the natural flushing of the system and has also increased the amount of nutrients, leading to large algal blooms. These blooms smother the seagrass growing in The Coorong preventing essential light from reaching them. When the algae die they sink to the bottom of the Coorong or wash up onshore and decompose, sucking vital oxygen out of the water and creating a repugnant sulphide smell.

While this does seem rather grim there is hope. There are a fantastic bunch of scientists dedicated to restoring the Coorong to its former glory. I myself, am employing environmental DNA technologies in my PhD to see how the seagrass communities have changed through time to inform how we should approach repairing this system. This coastal lagoon system is so magical it really does need some TLC and a lot of support and attention to save it from ourselves.

One thought on “The narrow neck of South Australia, The Coorong.”